A sample measurement of the half-life of 137mBa

This week I’m running the “Radiochemisches Praktikum” here at the Atominstitut. With only 5 students this week it has been a good experience and some interesting discussions.

Our example today is a very nice one we’ve been using for quite a long time. Way back, Prof. Buchtela built a nuclide generator out of a steel capillary and a 1 ml syringe. The inside of the capillary was covered with the iron (III) salt of hexacyanoferrate (II), or prussian blue. Onto this salt, 137Cs ions were absorbed. When 137Cs decays, 137mBa is produced. Since the Ba-ions are smaller than the Cs-ions, they can be eluted with diluted hydrochloric acid. In this way, the short-lived (T1/2=2.5 minutes) 137mBa is separated from its much longer lived (T1/2=30 a) mother nuclide 137Cs.

The solution containing the 137Ba was put on a small piece of paper and measured repeatedly with a simple GM-counter. As expected, the measured count rate decreases over time. The students then marked the measured values on a piece of semi-logarithmic paper (you remember this?)

That in itself was a bit of a challenge, since they haven’t used something as simple as that in a while. Once they had a nice, almost linear looking plot, they tried to derive the half life of 137mBa from fitting (eyeballing) a line to their plot. Turns out, they had a really hard time to arrive at a reasonable number. The major problem was to wrap their heads around the concept of a linear fit to an exponential curve 😉

Since this time around, they came up with some really good values, here’s a quick plot and fit that gets the half-life almost right: 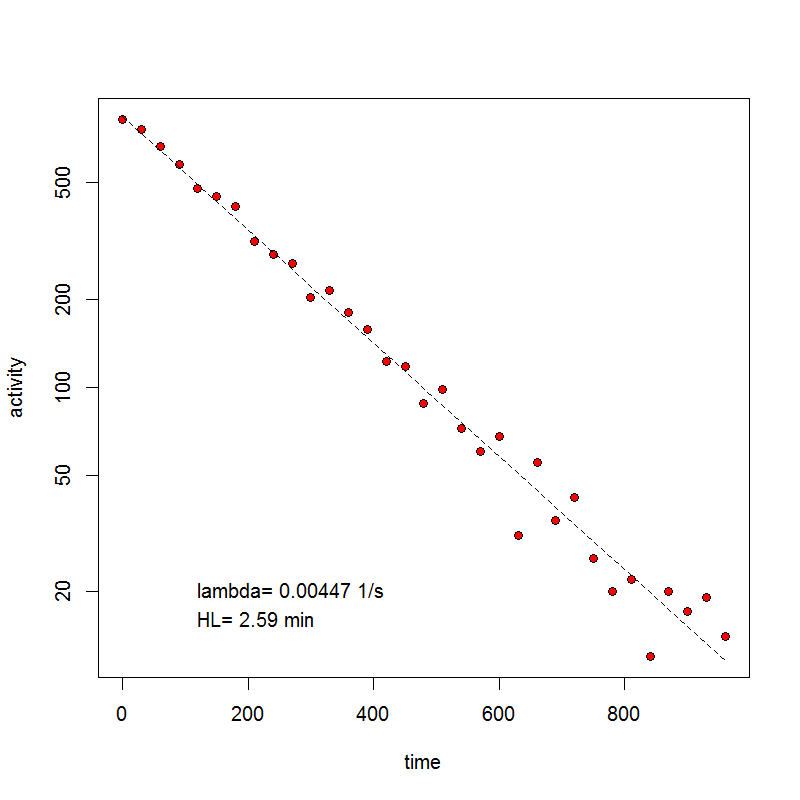